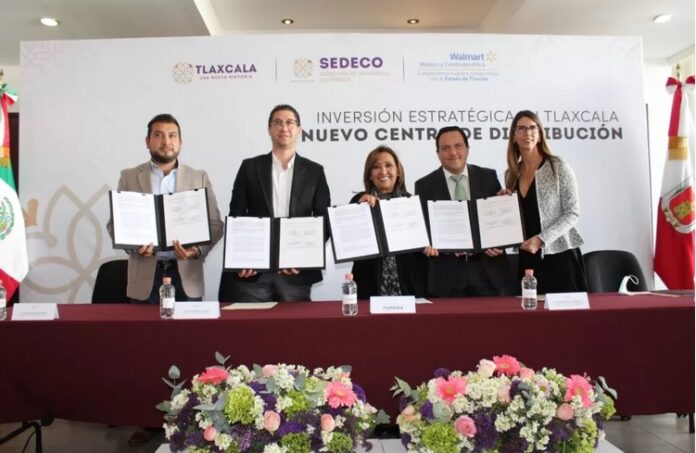 A collaboration agreement was signed for the construction of the new Walmart Distribution Center (Cedis) in Tlaxcala, with an investment of close to three billion pesos.

Of which, 608 million will be allocated to technology and innovation, which will be connected with the company’s omnichannel value proposition.

With this strategy, it intends to supply 240 stores located in Mexico City, Hidalgo, Oaxaca, Puebla, Tlaxcala, and Veracruz.

The agreement for the construction of this property in the city of Huamantla was signed between Walmart México y Centroamérica and the Government of the state of Tlaxcala.

During the signing of the agreement, Lorena Cuéllar Cisneros, governor of Tlaxcala; Javier Marroquín Calderón, secretary of Economic Development of the state; and Juan Salvador Santos Cedillo, municipal president of Huamantla.

The Walmart Cedis in Tlaxcala is expected to open its doors in 2024 and generate more than 1,200 direct jobs and more than 700 indirect ones.

Currently, Walmart México y Centroamérica has a network of 31 distribution centers. Of these, 20 operate in the country.

“Walmart México y Centroamérica maintains a firm commitment to the country through investment in infrastructure and technology. As well as the generation of jobs “, the company issued through a statement.

Under this premise, and with the new Walmart Cedis in Tlaxcala, it seeks to promote the logistics network throughout the Republic; a region where it serves more than five million daily customers within its two thousand 705 stores and clubs.