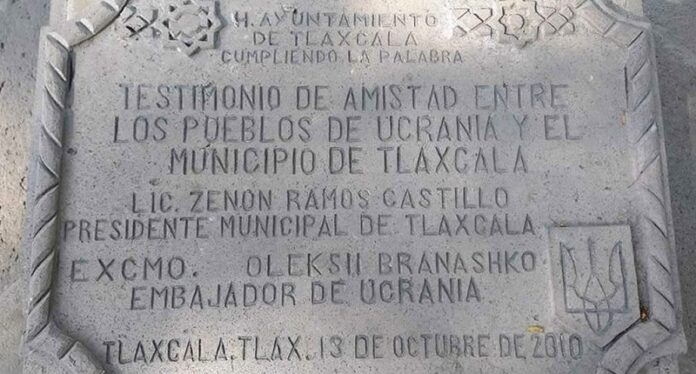 The city of Tlaxcala has been twinned with the country of Ukraine since 2010, as evidenced by a plaque in which the brotherhood of both peoples was reflected during a visit by the then ambassador of that country, Oleksii Branashko.

The plaque was placed in the main square of the Tlaxcalan capital city after the signing of a cultural exchange in which a Ukrainian dance group participated.

The plaque is dated October 13th, 2010, and was signed by the then municipal president Zenón Ramos Castillo, as well as by the Ukrainian diplomat.

“Testimony of friendship between the peoples of Ukraine and the municipality of Tlaxcala,” reads the plaque.

The image began to spread widely on social networks after the military invasion of Ukraine.

In an interview with local media, the former Tlaxcala Municipal President Zenón Ramos Castillo explained that the plaque was placed as a result of the cultural rapprochement of both regions.