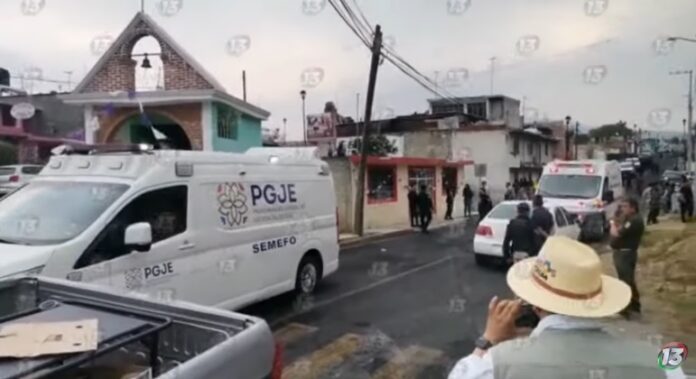 Chiautempan, Tlaxcala.- From celebrating Good Friday and the staging of Jesus’ Stations of the Cross, the inhabitants of the community of San Pedro Tlalcuapan, municipality of Chiautempan, Tlaxcala, became the protagonists of a lynching in which a man died, beaten, and burned, after he was accused of having tried to rob a house.

The procession traveled through the downtown area of ​​the community, hundreds of Catholics in unison with religious songs, recalling the last minutes of Jesus’ life, before being crucified.

“Save me, Virgin Mary, save me, I implore you with faith. Oh Mary, save me, save me,” the believers chanted as they flanked the images of the Virgin of Sorrows and Jesus of Nazareth. Behind them, just in front of the church, the traditional representation of the Viacrucis was live.

Almost simultaneously, on the main street of San Pedro Tlalcuapan, a mob of residents detained a man, after they allegedly surprised him when he entered a house to rob. They beat him, tied his hands and feet, and continue with the beating until he was unconscious.

They closed the access to the town to prevent agents of the state and municipal police from entering, who deployed a failed rescue operation to try to save the alleged thief of the lynching.

“The community rules here,” exclaimed men and women, when police officers entered the area and asked to reach an agreement to release the detained man.

“We can reach an agreement, we have to talk,” responded some police officers in an attempt to rescue the alleged criminal.

At 4:10 p.m., the Command, Control, Communication, and Computing Center (C4) reported that on Diego Martín Street, in Tlalcuapan, the residents of the community abandoned the lifeless body of a man in the middle of the street. They poured gasoline on the man’s body and set it on fire.

Once the lynching was completed, agents of the Secretariat of Citizen Security (SSC) and the Municipal Police Directorate of Chiautempan cordoned off the area so that experts and investigative police from the State Attorney General’s Office (PGJE) could come to take the body to the SEMEFO.

According to a report by paramedics from the Red Cross, the man suffered third-degree burns in 80% of his body, a report that was delivered to PGJE personnel.