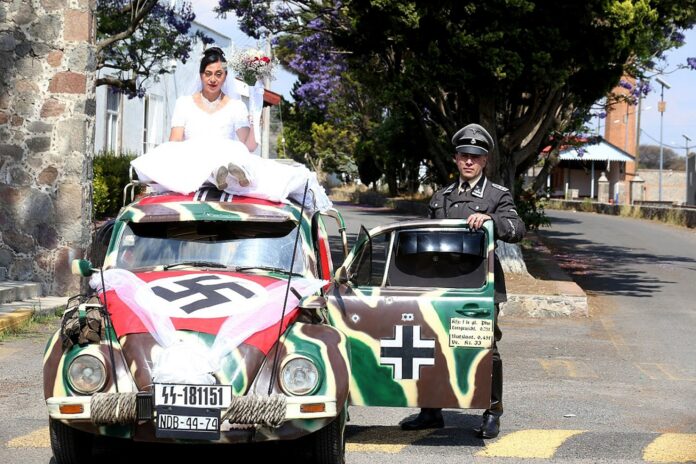 A couple recreates the wedding of Hitler and Eva Braun in Tlaxcala. The Jewish community, international institutions and the ombudsman against discrimination condemn the act.

Fernando and Josefina were married on April 29 in Tlaxcala, in central Mexico. They chose precisely that date because Adolf Hitler and Eva Braun celebrated their wedding on that day. She was wearing a white dress. He, an SS uniform. The local press documented the ceremony in detail. The wedding carriage, an old Volkswagen, was decorated with camouflage, a swastika on the hood and a black cross on the driver’s door, the emblem of the Luftwaffe and from various German military vehicles during World War II. In the images it can be seen that some guests wore Mexican boots and hats, and others dressed up as soldiers. The bride and groom also recreated several photos of their “idols”, which, due to frank ignorance or astonishment, became viral on the Internet.

The media presented the Nazi wedding as a surreal, almost innocent curiosity, with the groom defending that Hitler was “loved by his people”, that National Socialism “has helped” him in his life and that he has suffered since he was a child for his “ideals”. . The Jewish community and international organizations to preserve the memory of the Holocaust have not been amused.

“Our institution strongly condemns the distortion and trivialization of the memory of six million Jewish brothers killed in the Holocaust and the contempt by those who deny or distort history, as well as all those who lent themselves to this despicable lack of respect. ”, Ariel Gelblung, director for Latin America of the Simón Wiesenthal Center, a Jewish human rights organization, said in a statement. The institution has urged the Mexican authorities to condemn the wedding for promoting hate and racist speech.

Tribuna Israelita, an institution that serves as the spokesperson for the Jewish community in the country, has joined the condemnation of “any action that apologies for and extols Nazism, an ideology responsible for the murder of millions of people, including six million Jews. , as unfortunate happened during a wedding in Tlaxcala “.

The National Council to Prevent Discrimination ( Conapred ) has stressed this Wednesday that Mexican laws prohibit anti-Semitism and has described the act as a “manifestation of intolerance.” “Regarding the thematic wedding and the dissemination carried out by the media, from Conapred we consider it necessary to remember the terrible events that took place on European soil during the Holocaust, a crime without parallel in the history of humanity”, he pointed out. .

The couple had no problem celebrating the religious ceremony in a Tlaxcala parish or in a civil court a couple of years ago, when Josefina’s dress sported a swastika. Fernando even had no qualms about presenting himself as a “public official”, although no further details were published. The marriage has two children: Reinhard, alluding to SS General Reinhard Heydrich, and Hanna Gertrud, after Nazi pilot Hanna Reitsch, and Gertrud Scholtz-Klink, president of the National Socialist Women’s League. “I know that for many people Hitler was a genocide, a symbol of racism and violence, but people judge without having information or because they believe in the history of the victors,” says the boyfriend in a report published in the newspaper Milenio.

In the note, signed by the newsroom and including eight photographs of the ceremony, several of the attendees are confronted about their apology for Nazism, but their arguments are reproduced in full and without nuance. “We have been led to believe that Hitler was a racist, but he came to greet Jesse Owens at the 1936 Olympics,” says Fernando, for example. “A brazen lie”, the Wiesenthal Center has reverted.

“It is ignorance,” summarizes Jaime Romanowsky, a Jewish specialist in genocide issues who attributes these discriminatory signs to ignorance among the bulk of the population about their religious tradition and a desire to “know more” and go “against what they believe others”. “To deny the Holocaust is to deny the obvious, something that the perpetrators themselves have admitted,” he adds.

Discrimination against Jews is not over, and hate speech, in general, has experienced a new global boom that challenges traditional conceptions of what is acceptable and what is not, especially in light of the technological age. But it is not a matter of the digital world. The Anti-Defamation League has recorded more than 2,700 anti-Semitic incidents of assault, harassment, and vandalism in the United States alone in 2021, the most since measurements began in 1979.

In Mexico, where almost 60,000 Jews live according to the last census, there are no specific or systematic data, but the most recent national survey on discrimination lists religious beliefs as the second most common reason for offenses, only after physical appearance. Several members of the community, however, do not consider this to be a general trend. “Fortunately there have been no massive outbreaks, they are isolated, but in any case, we cannot allow this to happen and we must prevent it from growing,” says Romanowsky.

One day before the wedding, Yom HaShoah was celebrated, the day on which the victims of the Holocaust are commemorated each year, while this Wednesday those who fell in war are remembered as part of Yom HaZikaró. “Most likely those who got married did not know him, but this is done so as not to forget, to know how fragile we are and to avoid any indiscriminate attack against minorities and innocent people, whether or not they are Jewish,” explains Romanowsky. “Above all, to prevent history from repeating itself.”

Fernando, who is a public official, said that if they had not found a mass that day they would have been married until the following year and recalled that, on that same date, but in 2016, they were married in the Ecatepec civil registry, where they live.

She recalled that at her civil wedding, Josefina put a swastika on her white dress and Fernando put on the same suit he wore for the church wedding.

Given the photos published on social networks, the Jewish organization Simon Wiesenthal Center, which defends human rights, asked the Mexican government to condemn the celebration for the symbology used.

The theme of the wedding has caused controversy on the internet where Internet users pointed out that, if this couple had lived in the time that Hitler ruled, they would have ended up dead in a concentration camp.

“They have hit me, they have spit on me and they have even thrown the car at me when I am driving my little voice. The worst was once when they pointed a gun at me and called me a Nazi, but the beauty of loving an ideal is dying for it,” Fernando said.

In addition, his children have German names, one is called Reinhard, in honor of General Reinhard Heydrich, leader of the SS, while his daughter is called Hanna Gertrud after Hanna Reitsch, the pilot who, according to myth, rescued Hitler from the bunker where was in hiding and by Gertrud Scholtz-Klink, who was president of the National League of National Socialist Women.