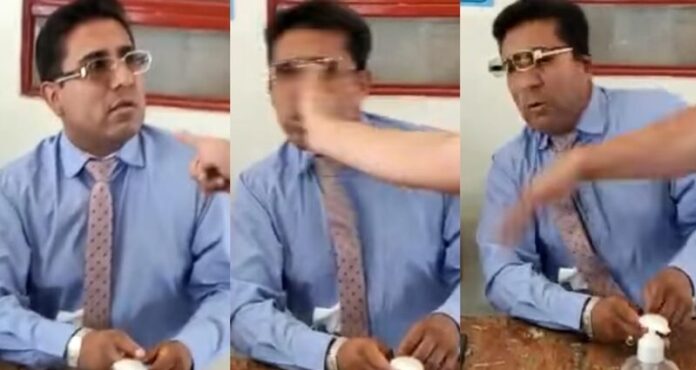 A video circulates on social networks that went viral and shows a father slapping the prefect of the school where his daughter attends, for allegedly harassing her. The incident was recorded in Tlaxcala.

According to reports, the video was recorded at the Colegio de Bachilleres (Cobat) 03 in the municipality of Calpulalpan in Tlaxcala. In it, the father of the family is shown entering the school and assaulting the prefect for allegedly harassing his daughter.

“My daughter told me that you are a fucking bastard. Don’t overdo it or I’ll give birth to your […] mother”, warns the father after giving him a slap.

The man warns the prefect that if he continues to harass his daughter “it will be worse.” The prefect, who was previously talking on the cell phone, does not react to the slap, although he looks visibly surprised.

The media reported that in the original video it was eliminated, assuring that the prefect had more complaints of harassment against female students in his file. However, so far it is unknown if there are complaints against him or if the relevant authorities have intervened in the case.

Users react to the aggression against the prefect

For their part, users on social networks disagreed with the aggression of the alleged father of the family, as they assure that violence will not solve the problem and will even worsen the situation.

In turn, they recalled that it is important to show the evidence to the authorities, since they cannot blame someone without convincing evidence.

“Very bad. She had to file the corresponding complaint. Now, anything that happens to the ‘degenerate’ will be the father of the daughter’s fault”, “That reaction is very bad since he is an ‘alleged’. It is not known if what the girl says is true or she accused him only because he is a prefect ”and“ I do not defend him because I do not know the situation. Do you have proof?” were some of the comments.

They accuse the prefect in networks

According to the site Alerta Vigilante, the original video was deleted, but in it there was a legend that the prefect allegedly had more complaints in his file about harassment against female students. However, this has not been confirmed and the authorities have not said anything about the case.