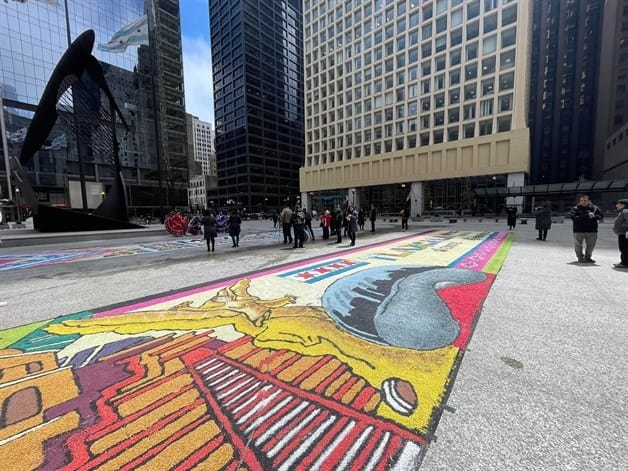 Despite the rainy and windy week, Mexican artisans from the state of Tlaxcala were committed to finishing two monumental stone carpets adorning Daley Plaza.

On Thursday afternoon the group finally completed the carpets after a month of planning and several setbacks because of the weather, said artisan Francisco Montiel. Each carpet was designed to depict the ties between Chicago and the people of Mexico.

The endeavor was a part of the first-ever Mexico Week, in which the consul general of Mexico in Chicago organized several events to celebrate Mexican culture and aim to challenge the stereotypical Cinco de Mayo celebrations taking place.

Other commemorations include a special dish created by chef Carlos Gaytán of Tzuco restaurant, the exhibition “Images of Mexico,” at the Mexican Consulate, the inauguration of the Wings of Mexico sculpture downtown, and a ceremony to name the library of Instituto Cervantes after the Mexican writer José Emilio Pacheco.-

On a rainy evening, Mayor Lori Lightfoot gathered with Ambassador Reyna Torres Mendivil, congressman Jesús “Chuy” García, and several other Mexican government officials to take a picture in front of the Wings of Mexico sculpture placed in the Plaza of the Americas on the Magnificent Mile.

The sculpture by Jorge Marín which will remain in the plaza until Oct. 1, celebrates Chicago as a welcoming city for immigrants and refugees. Behind the sculpture of the wings, there was another elaborate carpet.

Montiel and his team, he said, are honored to adorn some of Chicago’s most emblematic places with the picturesque carpets traditional to his hometown of Huamantla, a city in Tlaxcala in Mexico.

Though the materials used for the carpets created in the city had to be adapted to fit Chicago’s weather, the carpets are “extremely similar” to the ones he elaborated under team Arte Magico De Huamantla in Mexico, Montiel said. Rather than using sawdust, flowers, and fruits, the carpets in Daley Plaza were made of stones.

In Huamantla, the carpets are created on the streets to adorn the town every August as part of a religious tradition to honor La Virgen de la Caridad — Our Lady of Charity — and as a symbol of gratitude for health and a good harvest.

While creating the work, which features an image of The Bean and the Chicago flag, Montiel invited passersby to contribute by helping to add stones to the design or hearing the history of the carpets.

“We wanted to make sure that we made this more interactive so that the people of Chicago can feel our warmth,” Montiel said in Spanish.

An expert in carpet-making art, Montiel grew up in Huamantla, Tlaxcala, and learned the trade while growing up, he said. Over the past decade, he has taken his art to various parts of the world.

“We always feel welcomed here,” he said. “I enjoyed the questions from people passing by asking us about the carpets because we got a chance to share our story and our art.

During the gathering at the Plaza of Americas, Lightfoot commended Torres Mendivil for her work in Chicago as the first woman to serve as the consul general in Chicago and said she was “an asset” to the Chicago area that is home to more than 1.5 million people of Mexican origin.

“The Week of Mexico pays tribute to the long-standing strong ties between the city of Chicago and Mexico. It showcases the important contributions and influence that Mexico has had in every aspect of our city of Chicago,” Lightfoot said.

While Chicago is home to migrants from all over the world, Mexican immigrants make up the largest group. Torres Mendivil said that events seek to also highlight the diverse backgrounds and traditions of the Mexican communities living in Chicago. Tlaxcala, for example, is the smallest state in Mexico and therefore, often overlooked.

Montiel said that having the opportunity to create their carpets in Chicago can open a new world for many people and invites everyone to visit Tlaxcala.