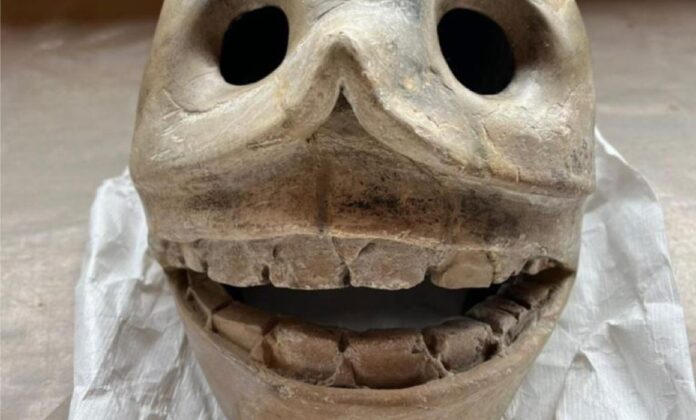 TLAXCALA, MEXICO.- The Federal Ministry of Culture, through the National Institute of Anthropology and History (INAH), reinstated 15 pre-Hispanic pieces to the collections of two museums in Tlaxcala, after their successful exhibition in the temporary exhibition La Grandeza de México.

From Cacaxtla, a site of cultural affiliation in the Central Highlands, Valle Poblano-Tlaxcalteca, a modeled clay sculpture was exhibited with a zoomorphic jaguar headdress and its attribute in each hand: an ear of corn and a lightning bolt. The figure dates from the Epiclassic period (650-900 AD) and was made of reddish-colored fired clay.

The figure represents a deity or a symbolic or mythical character with some anthropomorphic characteristics. The character is standing with arms outstretched to each side. The back is a kind of battlement or modeled glyph. He identifies himself as Tlaloc, and on his feet, he wears adornments with ties or bows.

Likewise, an architectural element in the shape of a cob, made of clay, 20 centimeters, which also dates from the Epiclassic, was exhibited.

From Tecoaque, 13 objects were included: a complete votive axe, made of marble, whose antiquity is estimated around the year 550 AD; as well as seven octecómatl clay pieces (a maguey-shaped vessel); two complete knives, one quartz, and one flint; a restored and complete standard bearer, made of clay; a Cuauhxicalli (a piece of stone to deposit the hearts of the sacrificed) elaborated in tezontle sandstone, which presents the glyph Nahuitepatl (the moon), and a clay incense burner, complete and restored. All of these objects date to the Late Postclassic period (1200-1520 AD).

On August 31, personnel from the Cultural Assets Protection Area of ​​both archaeological zones and the National Coordination of Museums and Exhibitions of the INAH, reintegrated the 15 pieces, complying with the security protocol, accompanied by elements of the National Guard. The public can already appreciate them in their original spaces.

The exhibition La Grandeza de México brought together more than 1,500 heritage pieces and was exhibited in two venues: the National Museum of Anthropology and the Ibero-American Hall of the Ministry of Public Education (SEP), in Mexico City, where it received 158,679 visitors.